The California Transit Association has announced the selection of Alameda County Supervisor Scott Haggerty as the recipient of its 2020 Distinguished Service Award. This award recognizes an individual who has had a long and distinguished career and has made outstanding contributions to public transit.

Haggerty was recognized for his relentless advocacy for transportation matters over the course of six four-year terms on the Alameda County Board of Supervisors. The award was presented today at a virtual ceremony held in conjunction with the California Transit Association’s Fall Conference. In accepting the award, Supervisor Haggerty remarked, “As elected officials, we don’t do this work for awards. But when you are acknowledged by such an esteemed body as the California Transit Association, it really solidifies that maybe the work you are doing does matter.”

Among the career achievements which led to Haggerty receiving the award:

-Currently serving as Chair of the Bay Area’s 9-County Metropolitan Transportation Commission (MTC) and being the only individual ever to have held this position twice;

-Serving as one of the founding policymakers on the San Joaquin Regional Rail Commission, which oversees the operation of the Altamont Corridor Express (ACE) commuter rail service connecting California’s Central Valley with Silicon Valley;

-Initiating legislation that resulted in the formation of the Tri-Valley – San Joaquin Valley Regional Rail Authority, which has advanced the Valley Link rail project – and serving as Chair of this Board since its inception in 2018.

-Leading efforts that have resulted in an estimated $2 billion dollars of transportation improvements in Alameda County’s District 1 – for roads, highways and public transit.

Supervisor Haggerty is now in his 24th year of service as a member of the Livermore Amador Valley Transit Authority (LAVTA) Board of Directors. For half of those years, he has held the title of Chair or Vice Chair of the Board and has also served as a member of the LAVTA Projects and Services Committee. He was a leading proponent of the high frequency Rapid bus service that LAVTA introduced in 2011 and expanded five years later. In 2016, he secured $1 million in funding so that LAVTA could be one of the first transit agencies in the nation to test autonomous vehicle technology on public streets.

Supervisor Haggerty is retiring when his current term ends at the end of this year. However, the transportation infrastructure and transit service that he helped put in place during his quarter-century of service will remain far into the future. 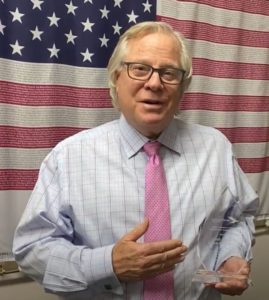 More than 100 people were in attendance today for the dedication of “Angie’s Way” at the entrance to the Livermore Transit Center off of Old First Street. A commemorative sign was installed in honor of Angie Navarro, who was a beloved carhop for nearly 25 years at the A&W Drive-In that once stood at this corner. Though she passed away last year, Angie’s warm personality and sense of humor will always be remembered as part of Livermore’s heritage. ... See MoreSee Less

The Wheels marketing team was honored today at the annual conference of the American Public Transportation Association with a Grand Prize in the annual AdWheel marketing competition for a video about our shared autonomous vehicle. Alameda County Supervisor David Haubert, who serves on the Wheels Board, accepted the award. ... See MoreSee Less