Relocation and Rehabilitation of Livermore’s Historic Depot – Project Underway
The Livermore Amador Valley Transit Authority (LAVTA) is excited to have the historic Southern Pacific Railroad Depot (Depot) relocating to the downtown Livermore Transit Center (Transit Center). The Depot will once again be aligned next to the tracks where it served the community for many decades as a point of gathering for movement of people and freight. 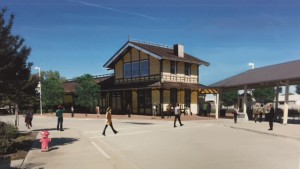 The project involves the relocation of the Depot from its present location at 20-22 South L Street to the Transit Center at 2500 Railroad Avenue. The relocation project includes removal of non-historic additions to the Depot and the rotation of the Depot 180 degrees to facilitate passenger interaction with the ticketing office, and rehabilitation to appropriately reconstruct previously lost or destroyed exterior features.

At right is an artist rendering of what the Depot will look like at the Transit Center.  The relocation and rehabilitation project will preserve a treasure for future generations, as well as add energy to the downtown area.

Construction updates and expected major activities will be posted on this page, along with detours and deviations for routes affected by the Depot project.

The weekend of July 15-16:  The historic depot building was moved overnight from its former location on South L Street to the Livermore Transit Center property. Click here to watch a video of the intricate process required to move the building to its new home.

Also beginning July 10, construction activity will impact operations at the Transit Center site. The pick up and drop off locations for all routes will change and several routes will be operating on detours during the construction project. Click here  for details.

The week of June 5th: Intermittent shutdowns of Railroad Court are expected and temporary detours of westbound routes 10R and 14 may occur. Minor delays should be anticipated.

The week of May 29th: Intermittent shutdowns of Railroad Court are expected and temporary detours of westbound routes 10R and 14 may occur. Minor delays should be anticipated.

The week of May 22nd: The temporary Transit Center building will be delivered this week. Temporary water, sewer and electrical hookups will be connected to the temporary building. Minor deviations of Routes 10R and 14 (westbound) may be in place intermittently this week. Some asphalt work also taking place in the bus loop. Pictures 1 and 2 below show the new temporary Transit Center, and picture 3 shows work being done in the bus loop. 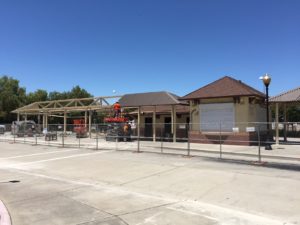 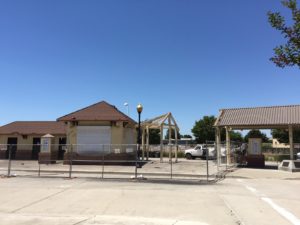 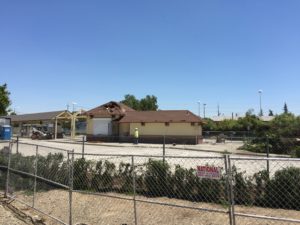 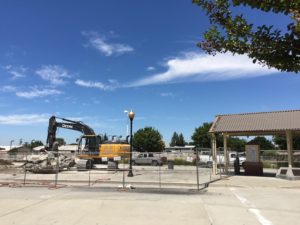 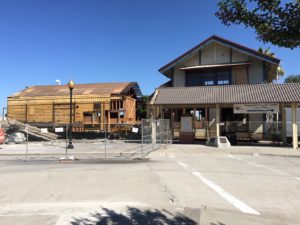 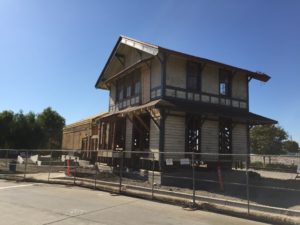 Background Information on the Depot Project

Livermore Depot as a Historical Building 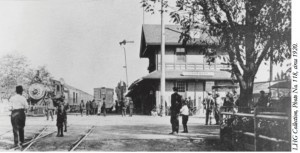 The Livermore Downtown Specific Plan Historic Resource Inventory designates the Depot as a historic resource. In 2009, Garavaglia Architecture, Inc. undertook a formal evaluation of the Depot’s eligibility for listing on the National and California Registers. The findings recommended the Depot be listed on the California Register of Historic Resources for its association with the development of the Livermore Valley and for its representation of a Southern Pacific standard depot design.

Furthermore, the findings recommended that although the relocation of the Depot to the proposed site at the downtown Livermore Transit Center on Railroad Ave would impact its integrity, it would not impact its integrity to a degree that should endanger its eligibility for listing on the California Register of Historic Resources. Additionally, the report states the proposed relocation will help to reconnect the building with its rail-related past, with potential to return this important local resource to its historical uses and to again provide a context for its continued enjoyment and interpretation.

The Depot will be relocated to the Transit Center ticket island and replace the existing transit center structures exclusive of the long covered platform extending to the east, most of which will remain. The Depot’s historic alignment with the railroad tracks will be re-established by placing it parallel with the tracks. In honor of its historic function, LAVTA will use the Depot as a transit ticket office, which provides tickets for both the Wheels bus system and ACE rail services. 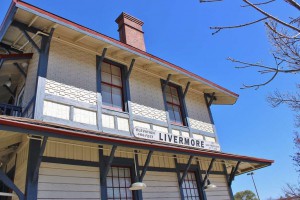 climb an accessible ramp or staircase. Additionally, this realignment provides better sightlines of the historic building when arriving on ACE, bus or by car.

The Depot retains the majority of its exterior character-defining features from within the period of significance. The
recommended rehabilitation plan anticipates the retention of all
original, sound siding and exterior decorative materials. Specifically, the overall architectural expression, wooden siding, older wooden windows, first-floor eave, multi-lite glazed doors, ticket window, wood accent trim and decorative woodwork at the Depot will not be altered or removed. Existing damage caused by sandblasting will be repaired to improve the appearance and long-term viability of these materials. No substitution of sound material is anticipated.

Some of the major exterior rehabilitation elements include the following:

In addition to the LAVTA designated space, the City will manage lease spaces on the first and second floor. The lease spaces will be designed to accommodate many uses, including but not limited to public meeting space, office space, and retail services.

New landscaping within the ticket island will include trees, shrubs, and groundcover. The California Live Oaks will be planted around the southwest portion of the ticket island and Erigeron Karvinskianus groundcover (Spanish Daisy) will surround each Oak tree. Herperaloe Parviflora (commonly known as Red Yucca) shrubs will bookmark the rehabilitated freight door on the Depot’s future south elevation.

Approvals of the Depot’s Relocation and Rehabilitation
On September 7, 2006, staff requested the Historic Preservation Committee (HPC) provide direction regarding the relocation of the Depot. The HPC provided preliminary policy direction that the Depot may potentially be relocated if treated appropriately within specific parameters. These parameters included preparing appropriate historical reports with consultation by experts in the field of historic resources preservation, rehabilitating the structure to retain and restore original design features, and with the preference to relocate the Depot to the downtown Livermore Transit Center (Transit Center).

On September 16, 2006, the Planning Commission reviewed this matter and recommended the City Council approve the relocation of the Depot, subject to the preliminary policy direction received from the HPC.

On October 30, 2006, the City Council approved the relocation of the Depot, subject to the requirements of the Downtown Specific Plan, in compliance with the Secretary of the Interior’s Standards for Rehabilitation, consistent with the preliminary guidance of the HPC, and identified the Transit Center as the preferred location.

Due to various circumstances, the project was then delayed for multiple years. One significant issue was due to the dissolution of the Redevelopment Agency that eliminated the potential use of redevelopment funds on the project. Subsequently, the City secured a $2.5 million grant from the Metropolitan Transportation commission to relocate and rehabilitate the depot.

On October 2, 2014, the HPC adopted a resolution supporting the relocation and rehabilitation of the Depot to the Transit Center parking lot. However, HPC members expressed interest in removing LAVTA’s existing ticket office and replacing it with the Depot for use as the transit ticket office in honor of its historic ticketing function.

Over the next year, City and LAVTA staff worked through many logistical factors to approver the relocation and 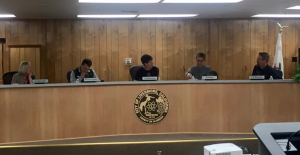 rehabilitation project and enable the use of the Depot as the LAVTA ticket office.  November 24, 2015, the City Council and LAVTA’s Board of Director’s executed a Right of Entry, Lease and Sale of Land and Terms Agreement, which demonstrates a City property interest at the Transit Center, a requirement of grant funds.  Then, on May 31, 2016, the Livermore Planning Commission formal adopted a resolution that authorized the project.