We are paying tribute to the late John Madden in a big way by wrapping an entire 40-foot Wheels bus and designating it as the “Memorial Madden Cruiser”. The bus made its debut public appearance at the “One More Monday Night in Oakland: A Celebration of John Madden” event on Monday February 14 at the RingCentral Coliseum in Oakland. It was parked next to the original Madden Cruiser in front of the entrance to the event.

Beginning yesterday, the “Memorial Madden Cruiser” was placed in regular service on Wheels and Rapid routes. The bus will be rotated between routes so residents throughout the Wheels service area of Pleasanton, Livermore and Dublin will have an opportunity to see it.

No public funds were expended on this project. The images used were provided at no cost by the Las Vegas Raiders organization and our advertising sales contractor Lamar Transit Advertising provided the design, production, and installation of the wrap. 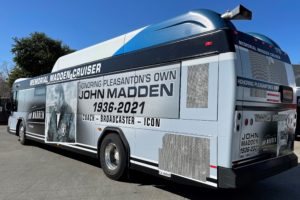